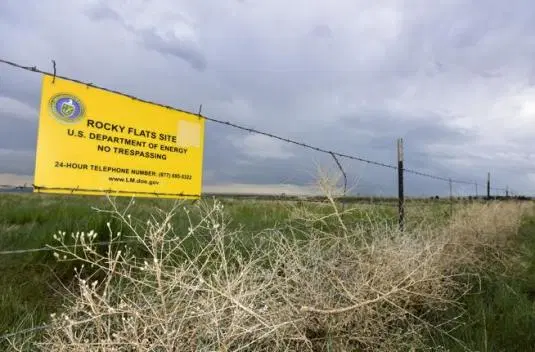 The Rocky Flats Nuclear Weapons Plant has a powerful history in Colorado, both positive and negative.  Local citizens produced plutonium triggers for nuclear weapons during the Cold War, from 1952 to 1989.  Unfortunately, the production of these triggers was fraught with issues which continue until this day.  Numerous accidents, as well as major fires in 1957 and 1969, contaminated the property outside the plant site. In 1992, Rockwell, the contractor that operated the plant, pled guilty to Environmental Crimes and paid a $18,500,000 fine.  The plant never reopened thereafter.  The plant site was “remediated” between 1996 and 2006 but the area surrounding the plant, known as the buffer zone, was not ever addressed.  In 2018, that area was designated as the Rocky Flats Wildlife Refuge and opened to the public for recreation, despite potential harm to public health and objections by citizens and organizations.

Exposure to plutonium is associated with leukemia, bone, lung, skin, brain, thyroid and liver cancers as well as autoimmune diseases.  There is also extensive research indicating potential damage from ionizing radiation to genes by permanently damaging DNA and RNA that can affect current and future generations to come.

We join community groups in calling for the following:

Please watch these videos by Dr. Sasha Stiles and Dr. Ed Granados to learn about the Rocky Flats Wildlife Refuge, and what PSR Colorado is working to achieve: