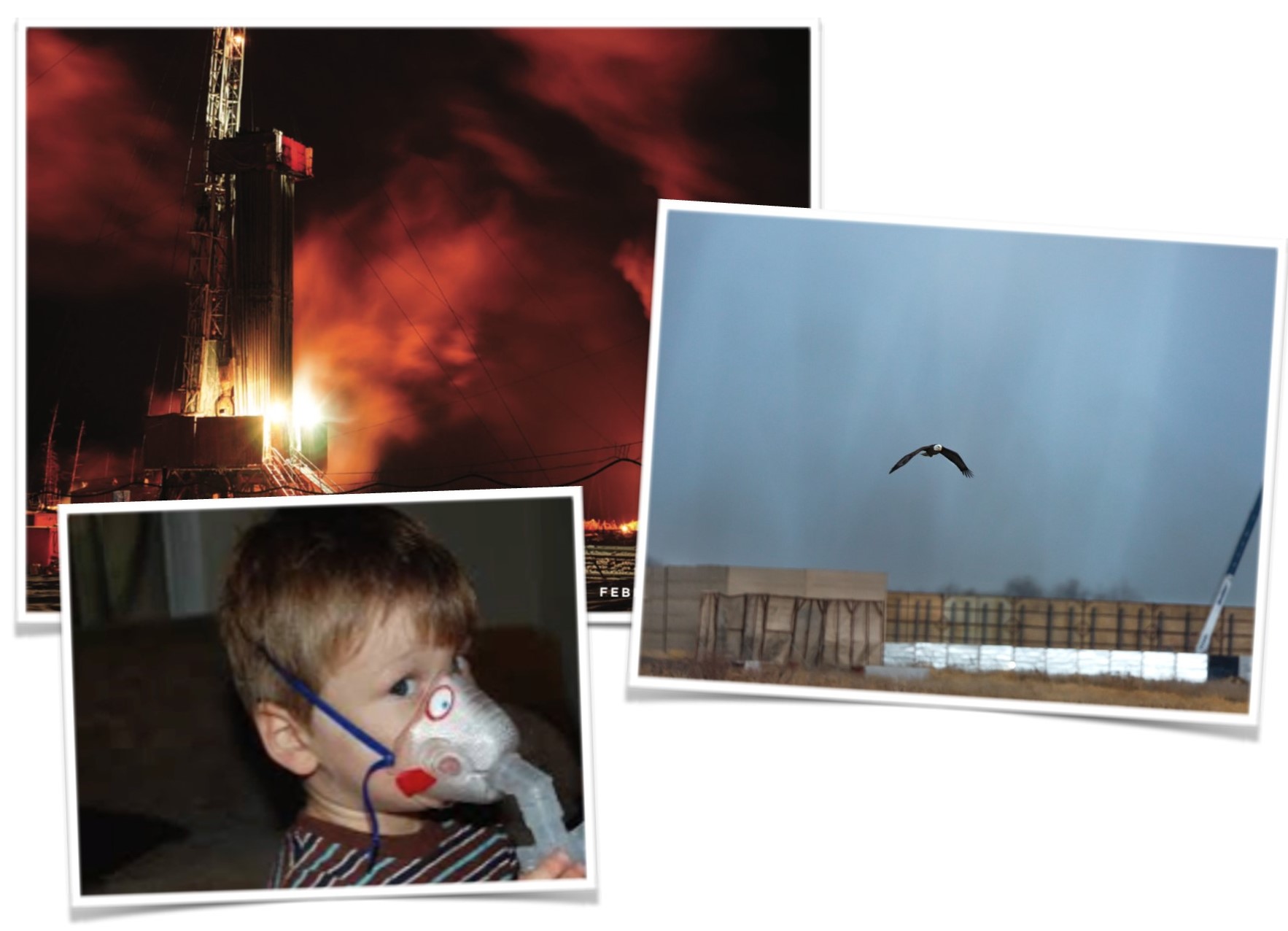 Physicians for Social Responsibility (PSR) is a scientific and educational organization representing medical and health professionals and concerned citizens, with nearly 40,000 members and supporters. PSR has been working for more than 50 years to create a healthy, just and peaceful world for present and future generations.

PSR Colorado works to elevate the voice of health professionals in regard to protecting the public from the health impacts of hydraulic fracturing, the climate crisis, and exposures to radionuclides and other toxic substances on current and future generations. PSR Colorado advocates for solutions to reliance on fossil fuels and nuclear energy.

A 2016 meta study of peer-reviewed scientific literature looked at more than 700 studies on the impacts of fracking published between 2009-2015. Of the studies looking specifically at health impacts, more than 80 percent document risks or actual harms. More specifically:

Physicians for Social Responsibility, in alliance with Concerned Citizens for a Healthy NY, publishes a periodic “Compendium of Scientific, Medical, and Media Findings Demonstrating Risks and Harms of Fracking” (1,000+ studies). Here are some conclusions from its 6th edition:

The Compendium concludes that findings to date from scientific, medical, and journalistic investigations combine to demonstrate that fracking poses significant threats to air, water, health, public safety, climate stability, seismic stability, community cohesion, and long-term economic vitality. Emerging data from a rapidly expanding body of evidence continue to reveal a plethora of recurring problems and harms that cannot be sufficiently averted through regulatory frameworks. There is no evidence that fracking can operate without threatening public health directly or without imperiling climate stability upon which public health depends.

Fracking operations release toxic gases, the most dangerous of which are volatile organic compounds (VOCs) including the BTEX complex (benzene, toluene, ethylbenzene and xylene). Benzene is a potent carcinogen and, according to the EPA, cancer risk can occur at any exposure level. All BTEX compounds are known to cause birth defects, impact the reproductive system, and affect the kidneys, liver and lungs (Colborn et al., 2011).

“Benzene is known to cause cancer, based on evidence from studies in both people and lab animals. The link between benzene and cancer has largely focused on leukemia and other cancers of blood cells” (American Cancer Society).

“Rates of leukemia, particularly acute myeloid leukemia (AML), have been found to be higher in studies of workers exposed to high levels of benzene, such as those in the chemical, shoemaking, and oil refining industries” (American Cancer Society).

A retrospective study conducted in 2017 found that children and young adults in Colorado diagnosed with acute lymphocytic leukemia were up to four and a half times more likely to live in areas with the highest density of wells as compared to those with no wells within a 10 mile radius (McKenzie et al., 2017).

A 2015 study found that residing near active gas and oil fracking sites in Pennsylvania was associated with increased cardiac, neurological, urological, cancer-related, and skin-related problems. In communities with the most wells, the rate of cardiac hospitalizations was 27 percent higher than in a neighboring county where such operations were banned (Jemielita et al. 2015).

In a pilot study of 97 people in Fort Collins, Greeley and Windsor, Colorado, researchers from the Colorado School of Public Health found that those who lived in areas of more intense oil and gas development showed early signs of cardiovascular disease, including higher blood pressure, changes in stiffness of blood vessels, and markers of inflammation (Crooks et al. 2018).

Research has shown significant psychological distress among people who live near wells including anxiety, depression, helplessness and fears for safety; a general deterioration of lifestyle and social world; a loss or diminishment of well-being; serious sleep disturbances from lights and noise; uncertainty about the health and safety of their futures. Overall, authors suggested that there are long-lasting and widespread negative mental health effects to those living in close proximity to fracking operations (Hirsch et al 2017).

In Colorado, while the CDPHE (Colorado Department of Public Health and Environment) has done risk assessments of the health impact of VOC’s from oil and gas, the health risks from particulate matter and ozone precursor emissions from oil and gas operations have been largely ignored.

The study estimated that in 2025 the human health burden would be about 1000 respiratory and cardiovascular hospital admissions, 3600 emergency department visits, tens of thousands of upper and lower respiratory symptoms, approximately 100,000 of lost work days and over a million cases of exacerbated asthma and acute respiratory symptoms. Premature deaths alone would result in losses of 13 to 28 billion dollars (Fann et al. 2018).

Between 2006 and 2015 Colorado experienced at least 116 reported oil and gas fires and/or explosions (Colorado Public Health News 2017). The actual number is thought to be larger, as many incidents are unreported because the COGCC (Colorado Oil & Gas Conservation Commission) requires reporting only in cases that “require medical treatment” or cause “significant damage” (Colorado Public radio 2017).

COGCC data analyzed by the University of Colorado-Boulder shows that some spills didn’t report amounts, less than half occurring in 2014 were cleaned up or closed by 2016 and sixteen percent of spills from 2008-2011 have not been closed (Armstrong et al. 2017).

There are about two industry self-reported spills per day in Colorado. The COGCC requires documentation of all spills but does not aggregate the data or evaluate ways to reduce spills. Of the 509 spills reported in 2016, 82% were on private land and flowback fracking fluid was the source of over half of the spills. Thirty-two percent were within 1500 feet of an occupied building, but no distance was reported for 52% of spills (Prentice-Dunn, J., 2016).

Companies reported 619 spills in 2017, state data show. Altogether, companies spilled more than 93,000 gallons of oil into soil, groundwater and streams. They also spilled more than 506,000 gallons of “produced water,” waste from drilling and hydraulic fracturing that emerges from deep underground and contains chemicals. That number of spills reflects a 17 percent increase above the 529 spills reported in 2016, state data show. Total annual spills remained lower than the 792 spills in 2014 and 624 in 2015 (Finley 2018).

In a five year period between 2008-2012, more than 2,000 Colorado leaks were reported, just by the industry. Of these, 17% resulted in verified groundwater contamination. As a result of the flooding in 2013, the COGCC reported spills totaling more than 90,000 gallons from oil/gas operations. The spill rate since 2013 has increased to approximately two per day.(Denver Post / Colorado Oil and Gas Conservation Committee)

In Greeley, Colorado, a massive well pad housing 24 wells was sited near Bella Romero Academy, an elementary school in a low-income community where 82 percent of students are Latino, after earlier plans were scrapped for a site near a charter school where students are majority white and middle-class (Turkewitz 2018).

Atmospheric methane (CH4) levels in the US have increased exponentially in the last 20 years, an increase directly tied to fracking. With methane being 86 times more potent than CO2 at trapping atmospheric heat over a 20-year period, and CO2 levels stabilizing, US fracking for natural gas is now the single most significant contributor to global methane increases. And while methane has less impact on climate than CO2, it has far greater impacts on human health and food crops through its roles in ozone formation and photosynthesis interference. Each additional Mt of methane causes 220-490 premature deaths per year due to ozone (Howarth 2019) (Drew Shindell, NASA/GISS/Duke U).

Colorado Public Radio, June 2017. Operator's discretion in reporting may account for lower rate of oil and gas fires in Colorado,

Turkewitz, J. (2018, May 31). In Colorado a fracking boom and a population explosion collide. New York Times. Retrieved from https://www.nytimes.com/2018/05/31/us/colorado-fracking-debates.html

US House of Representatives Committee on Energy and Commerce 2011. Chemicals used in hydraulic fracturing.